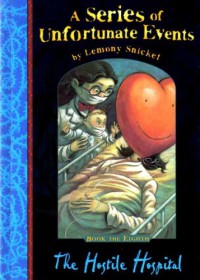 It's such a duh to say that as always, Snicket is brilliant. Even if you're not familiar with the Series of Unfortunate Events books, you probably could have figured out how much I like this one from the five stars I clicked for it.

Sunny's dialogue hits moments of humorous perfection in this volume. Some of her attempts at speech are random syllables, as has been the case throughout the series; but as she gets older, many of her remarks hit home (though no one seems to notice but her siblings):

"'After all, a cheerful attitude is the most effective tool against sickness.'

'I thought antibiotics were,' Klaus said.

'Echinacea!' Sunny said. She meant 'Or well-tested herbal remedies,' but the bearded man had stopped paying attention to the children.'"

Later, the Baudelaire siblings are discussing the wicked Count Olaf and his henchpeople with their usual thoughtful thoroughness. As is frequently the case, the more you know about other people's books, the more you can enjoy the works of Lemony Snicket:

"'Well, the Quagmires were researching Count Olaf and his sinister plot,' Klaus said. 'Maybe Ana Gram is one of Olaf's associates.'

'It's probably not the hook-handed man,' Violet said, 'or the bald man with the long nose. Ana is not usually a man's name.'

'It could be the name of one of the white-faced women,' Klaus said.

'Orlando!' Sunny said, which meant 'Or the one who looks like neither a man nor a woman.'"

This particular volume in the series is also, if I'm not mistaken, the first to touch on a moral concern Snicket goes on to explore in great detail: How do we tell the good guys from the bad guys in any given situation?

Violet, Klaus, and Sunny have just realized that they spent most of this book tricking to people, lying to people, and disguising themselves. Just like Olaf and his associates. In the course of escaping villains, have the Baudelaires become villains themselves?

"'We're not villains. We're good people. We had to do tricky things in order to save our lives.'

'Olaf has to do tricky things,' Violet said, 'to save his life.'

Sunny's right. Fleeing from pursuit and resorting to lies only when the world refuses to hear the truth is fundamentally different from pursuing the innocent and telling lies because it beats getting a real job. But as is the case in real life, the innocent always feel guilty while the guilty feel nothing at all. Violet isn't convinced of the Baudelaires' moral superiority until she witnesses a vivid demonstration of it. And if you want the details of *that,* I'm afraid you'll have to read the book.
Tweet